When he teaches Maths, it is like a smooth wine hitting your tongue and flows in your blood streams to lighten up your brains.

My name is Khangelani Wilmoth Sibiya, born in Newcastle and grew up at Jozini Biva reserve, I started my primary education at Biva Combined School where I completed my Matric and obtained a Degree of Senior and FET Bed in Maths & Science with Distinction at University Of Zululand back in 2010; I topped that with an award for being a best student at Department of Education, of which I was the only one who received that award in that particular year.

While still at school I used to help my fellow classmates in Maths and Science from then on my passion for these subjects became stronger.  I have been a teacher from 2011 till to date, however I started helping schools in 2008 during my 2nd year level at University Of Zululand. My methods of teaching were inspired by Mr Sibusiso A Mabaso my former lecturer at University of Zululand now a lecturer at Mangosuthu University of Technology.

One day I was presenting a particular subject in his lecture, Mr Mabaso Identified me and said my “presentation is smooth and sweet like KWV wine” from then on I became known as Mr KWV. From that day we started Maths & Science training together as a team including other student teachers; we embarked on a mission to visit schools around KZN which included schools around Ulundi, Port Shepstone, Nquthu, Empangeni. In 2009 I was nominated as a Chairperson of a newly found project called KWV Maths and Sciences Tutoring. We visited a lot of schools including the ones mentioned above: from Jozini, Mseleni, Nongoma, Melmoth, Mhlabuyalingana, Mandeni. We trained and recruited other student teachers to join our team.

During my final year in 2010 I received a nomination to be a Chairperson of Maths and Science in the Department of Education in KZN, where I worked hand in hand with Doctor D.C. Sibaya an H.O.D (Head Of Department) in Department of Education to formalise the project, other lectures who were involved were Mr Ngwenya, Dr Chili and Mr Rankumusi respectively.

At the same time I was also working as a tutor at RBCT Project, teaching Mathematics to learners from different schools at Khula High School Esikhawini, also helping PGCE stundents while I was still at the University.

READ  A powerhouse in classroom and community.

In 2011 I started working as an educator at Aquadene Secondary School. We then divided the Project into two, there was a University project and KWV Project, I implemented/introduced my Project KWV Tutoring which is registered in my school Aquadene to help learners from different schools, using student teachers from University of Zululand as tutors. My first Maths and Science centre was at Aquadene Secondary School in Richards Bay between 2011 and 2013.

I was appointed H.O.D of MATHS AND SCENCIE at Dumanikahle School in 2014. We opened three centres: Qhakaza School in kwaDlangezwa, Hlamvana School in eSikhawini and Richards Bay School however financial constraints made it very difficult to continue.

While still running our classes in two centres, we implemented term classes around oBuka at Ntambanana, learners from 6 different Schools (Dumezweni, Mkhombisi. Manzimhlophe, Mondini, Obuka and Nkosithandile) attended our classes however like the previous places we found that it was difficult to sustain these programs since they require financial responsibility from parents. Our last activity as a Project was to visit different schools around KZN to name a few: Nkombose at Mtuba, Bukimvelo at Hluhluwe, Jikijela at Mbhazwane, Mgazi at Nquthu, Kwanotshelwa at Vryheid.

Upon realizing the need in Maths & Science we then approached the Zuma Foundation, Transnet Foundation, Motsepe Foundation, King Cetshwayo Municipality and in all companies around Richards Bay e.g. RBCT, RBM, Mondi, FOSKOR, BELL for sponsorship unfortunately none of them ever replied.Challenges remain as challenges until someone with financial resources realize the work we are doing for schools in the Rural. As we were assisting from grade 8 to 12 learners enjoyed our lessons but could not afford to attend.

They were all citing financial problems as the main reason. Normal school teaching periods do not allow for enough contact time between learners and teachers of these subjects as they need more time to ensure that they grasp the content. Maths and Sciences matric results are poor due to lack of basic skills that we are providing as a Project. We have a solution as a Project we need someone with financial ability to back us up.

Students are dropping out from Universities especially in Engineering courses due to lack of basic Mathematics and Physical Sciences skills at high school level. With the country focused on producing more Black Industrialists our Project could help with skills development from an early age.

WHERE TO START MATHS AND SCIENCE TUTORING

I registered an NPO called WHERE TO START MATHS AND SCIENCE TUTORING in order to continue opening up more Maths & Science Centres and also help companies willing to support the project get tax exempt certificate, we have not received any support yet.

But the project expanded since we were helping more schools in Richards Bay e.g. JOHN ROSS SECONDARY, Every Fridays and on Saturdays we were helping EMPANGENI HIGH SCHOOL in Empangeni. I am still working with Mr Mabaso part time helping PGEC students at University of KwaZulu Natal (UKZN) and Mangosuthu University of Technology on weekends.

Toward the end of 2016 I was also appointed as H.O.D at Siphumelele Secondary School which was closer to my home compared to Dumanikahle. The Richards Bay Secondary Centre for Maths & Science had to shut down since it was costing me a lot to run. Now I am focusing on helping schools around the country with Maths and Science at a cost effective fee.

After failing to secure sponsorship I realized that I must come up with creative methods of teaching that will make learning Maths and Science more fun.

Together with skills I recieved from my role model and mentor Mr A.S Mabaso the approach was to link  Maths & Science with latest trends in youth life style i.e Dancing, Modelling and Music. Using our body to demonstrate some theorems in Maths.

And that is why learners now call me: DJ MATHS, DR MATHS, MASTERMATHS, BABES WEMATHS, PROF AND SOLWAZI SIBIYA. The impact is huge since they now love Mathematics because these methods of my teaching help them to recall everything they learned when they write a test/exams. There has been a change of attitude towards Mathematics after using these methods and they all request me to ask their teachers to use my approach in teaching these subjects.

READ  MAFUNDZA ON THE RISE.

In other words we relate learners’ social lifestyle to every aspect of Maths & Science. This helps us to not create a “Monster” out of these subjects but rather create something that learners can relate to.

My biggest highlight is that I now know that the passing criteria of Maths and Science depends on the teaching approach that we use as educators, and the approach that I am using of relating concepts of these subjects on what is happening in our daily life style makes these subjects more familiar with the learners.

I am a full time educator, but after school during the week I work in my WTS finishing school that I have opened this year. I am also a private tutor of Maths and Science from Grade 8-12 in Richards Bay and Surrounding areas.

On weekends I visit with my Tutors to different schools around the country as they invite us to come and help them and we also help other schools nominated by certain circuit manangers due to their previous Matric performances in both Maths and Science for Grade 12s only. Schools wishing to use my services can simple contact me at kwvsibiya@gmail.com.

My massage to my fellow educators is that the key to teaching Maths & Science is simply based on the following:

5 thoughts on “He massages Maths into students’ system.” 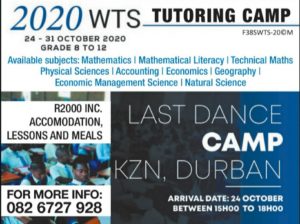