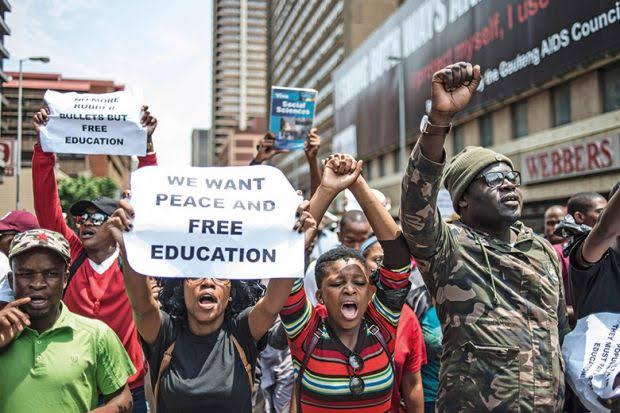 2021 School Term 1 started on shaky grounds for both Basic and Higher Education. While the Basic Education went under radar through the most part of the first term of 2021, there were eye grabbing headlines including the heartbreaking story of Lufuno to conclude the term.

Higher Education did not start this 2021 School Term 1 well. The protests and unrest at universities hampered any hopes of a smooth start to the year.

The violence unleashed by government on students resulted in a loss of life and serious injuries suffered by students. Maybe the scars on student’s body is a true reflection of a severely scarred education system in a wounded society which is desperate for healing.

A society that is hurting like South Africa is at the moment, will unleash that kind of violence upon students like we have seen happening in term 1 of the school calendar year.

Government leaders across all spheres have not shown any sensitivity, sympathy or urgency to address this historical pain reflected on children in school or universities.

Lufuno Mavhunga suicide left everyone in tears and shock, but perhaps a true reflection of the hurt and pain children born in to. Job losses and continuous rise in unemployment has to be seen as the mordenized form of Apartheid.

They both inflict similar pain and have similar outcome of broken families and economic discrimination of the majority of people whose children went on the street to protest and demand free education. The government response was fire and force! Sounds familiar isn’t it?

The start of Term 1 can be summarised as painful and heartbreaking.

Government leaders remain untouchable and consequent free, a sign of a defeated and monopolised society.

It’s election time. The very insensitive leaders who have unleashed violence on students will be knocking at your door asking for your vote. Encouraging the same young people that they attempted to murder to go out in their numbers and vote.

Lack of education will drive the unfortunate majority to vote like they have been voting for all these years. Which will not yield any change.

Term 1 has to be a good measure of how the year is going to end, and it doesn’t look positive. But we’re a strong people who rely a lot on our faith, it is time to pray harder than before.

The Pandemic of Leaks in the Matric Exams