Oratile dreams beyond circumstances in his hood 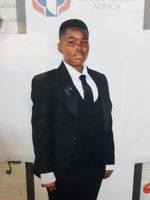 I had a dream and that dream was to be successful and be the second in my family to get a degree. Not knowing if that dream would be reality considering the fact that my family had always had financial problems and crisis, the fact that there were 9 of us in one house and every stomach had to be fed and basically because my mom was a single parent.

But like any other township kid, I grew up playing soccer on the streets with cousins and enjoyed playing games like “Black Mompati” and went to church (Jonas Lediga Presbyterian) every Sunday with my grandmother. In 2007, my mother decided to take me to an English crèche around SunnySide and I really thank her for that because that’s where my dream was starting to show fruits of reality. I then learnt to speak English (One box ticked) and only after that did I move on to primary at Arcadia Primary in Pretoria Central.

For me this was a good learning experience because it exposed me to diversity in many ways include both religion and race. I achieved quite a number of accolades like the best mathematics student for three years in a row (Grade 1,2 and 3) ,later on in Grade 6 I held a position in the Top 10 and lastly being a school prefect the following year.

I then started realizing that, the dream I once had might be a dream rethought again. Prior to this I applied for a high school scholarship in 2015 with a company by the name Allan Gray Orbis. It was my only hope of a great education and success, and I grabbed it. After the application in October 2015, I was shortlisted from about 4500 candidates and was through to the next round which was Literacy and Numeracy Benchmark Test that took place in November 2016 at Varsity College in Pretoria. Receiving 80% for my test, I was shortlisted to go to an interview in the Allan Gray Orbis Headquarters in Sandton.

I did very well at the interview and was just myself and again was I shortlisted to go to the camp which was held at a hotel in Johannesburg. We did quite a number of activities that let us get out of our comfort zones. After that I received confirmation that I was accepted by Standard Bank and Allan Gray to go to St Albans College in Pretoria.

It has been a long journey but it was worth the wait, NEVER GIVE UP, keep chasing that dream.