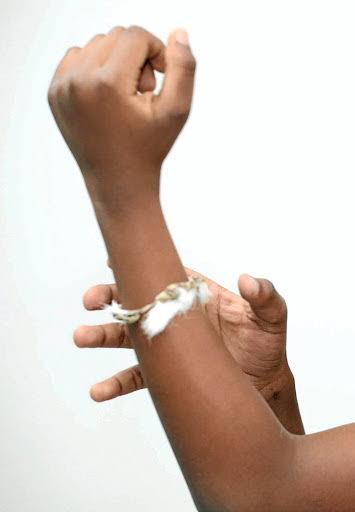 Christianity was at the center of controversy in the past week, after a Christian school ostracized a 9 year old pupil for wearing Isiphandla (wrist bracelet, made out of a goat skin).

The grade 2 learner at Christian Life Private School in Buccleuch, Johannesburg, was denied education because of a cultural practice at home.

This brought scrutiny to Christianity and the way it relates to different cultures. The incident also reveals the religion extremism which harbors racism and colonialism undertones.

Unfortunately Christianity has been at the center of slavery, colonialism and even apartheid.

It has flourished through dismantling people of Origin’s way of life and practices, while promoting and endorsing the Western Culture as the acceptable “godly” practice.

Morden day scholars of the Bible have opted to study Hebrew in order to get as close as possible to the truth of the original scriptures; this is because the various versions of the Bible have been found to have quite a few errors.

The bible itself reveals that Jesus lived in a particular culture; the current theologians study Hebrew which reveals a Jewish culture, Jesus and disciples grew up in that culture. And Paul, who wrote most of the New Testament articulate some of the cultural practices of the time in his letters.

Most of those cultural practices have been redefined in order to fit in to the modern way of life.

When the Western World translated the Bible, they did it according to their language, and Western definitions which embodies the Western Culture. This is why Jesus is presented as a white gentleman with blue eyes and speaks English. Which is now known to be a misrepresentation.

The Culture vs Christianity.

Isintu culture is mainly intertwined with ancestry consultation, but not all the time.

With many black people becoming Christians, the conflict was inevitable. Others have resolved to mix both Christianity and Ancestry consultation.

But there is more black Christians learning the difference between Ancestry Consultation and Culture. The mixture of culture and ancestry worship has resulted in the number of people neglecting and even hating their culture and heritage. Opting to devote themselves to Christianity.

There is nothing wrong with your culture as a black Christian including the traditional medicines (umuthi). However when ancestry consultation is involved, the conflict starts.

But once you start consulting the spirits of the dead family members, that is when your Spirituality as a Christian is comprised.

The Isiphandla in other tribes:

When the child is born, he/she is not allowed to be outside for a certain period of time. But also the child will not be able to visit Ekhabonina (mother’s side of the family) until he/she is at the particular age; but not as a toddler or a baby.

In the ceremony to welcome the child, the Omalume (mother’s brothers) would slaughter a goat for you. Then they cut out of a goat skin a wristband for you to wear as a sign to your father’s side of the family that you ate meat ko Malume (at the uncles’). Much more like what happened in the story of the prodigal son (the ring, the slaughter of a fattened cow).

Then as time goes it evolved to become an ancestry practice. Others may dispute this, but it comes down to each household according to that tribe and community.

In this case, parents acknowledged that the ceremony was made to introduce the child to the ancestors which then is in conflict with the Christian school belief system.

The bible says come as you are.

Now this is where Christian religion becomes a hypocrisy; Jesus seemingly broke most of the rules applied in Christianity today, in fact, the Bible shows a Jesus who has put to death the ten commandments by nailing them on to the cross.

The bible addresses extensively how Christian faith should interact with people in general. At no stage does it promotes shutting the door on people’s faces because they are not Christians!

In fact the opposite is required.

Jesus spent time with people filled with various demonic spirits! He chilled at their homes and they would get converted by his presence without him teaching anything to them.

Clearly the cult leaders at Christian Life Private School have missed a few sentences of the Bible. May be blinded and driven by their hate of the African child.

Whatever it is that they do, it has nothing to do with God and his Son Jesus. They are a cult of some sort.

Jesus spoke highly against refusing children of his grace. Sadly he didn’t describe what kind of children should be allowed into his presence; may be others were wearing the Isiphandla, others may have come from a Jewish home with very strong traditions and cultural practices.

See also  No one should be arrested at Enyobeni Tarven

Jesus never turned away anyone who came to him seeking help.

Parents of this boy came to this Christian school seeking help and the school gates are slammed in their face! Which god do they pray to?