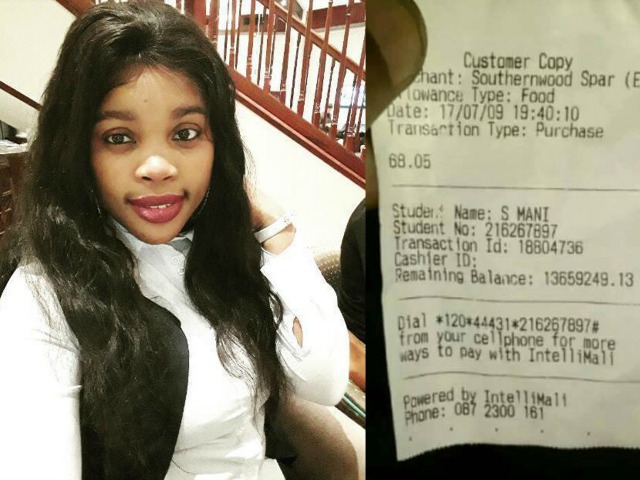 Money can be such a weakness....

With the majority of South African students relying on government for funding and tertiary fees, many students do not get the opportunity to study further or complete their studies due to lack of funds. Students from poor households put their education hope on the National Student Financial Aid Scheme (NSFAS). In an article by Michelle Gumede (February 19, 2017) for the Business DAY, It was reported that NSFAS has rejected over 50 000 applicants for reasons such as low academic results to low income households. In 2017 NSFAS board chairperson Sizwe Nxasana said that the number of funded students is expected to rise to a region of 450 000 from the 400 000 NSFAS had normally funded in the past. Unfortunately many students do not get the opportunity and their applications are not successful.

Fees must fall, that phrase and the movement behind that phrase began a student led protest in October 2015 in response to an increment of tertiary fees in the universities across South Africa. The movement gained motion from the University of Witwatersrand University (Wits) and then rolled over to other universities in South Africa, major ones like University of Cape Town also got involved as university and none university students protested from campuses, streets and parliament. The protest in 2015 had the nation and the world watched as tertiary education stood still as students united for one goal and course, from across different backgrounds, cultures and race they were united by the phrase Fees Must Fall. The movement was led by many activists who some got arrested such as Mcebo Dlamini who is still in trial for the Fees Must Fall related incidents. The movement was so powerful government was prompted to set up a fees commission looking into the feasibility of free tertiary education in South Africa.

The commission was chaired by a retired judge Jonathan Heher and started working in 2016 and had to submit the findings of the commission to the president in 2017. The fees commission had 120 witnesses who testified and welcomed over 200 written submissions. On August 2017 on the days leading to the submission of the report to the president Jacob Zuma, NSFAS and the Walter Sisulu University had to weather a storm of controversy as a student received a whooping R 14 million by mistake instead of the R1400 monthly allowances from NSFAS. The student who received the cool R14 million by mistake spent over R 800,000 of the R14 million, now that raises many questions: should the student pay back the money? Should she be charged by authorities even though she technically did not ask for it, did not steal it nor did she commit fraud? Another set of questions are how many millions are sitting around at the vault of NSFAS instead of funding the over 50 000 applicants who were turned away?  How many poor students would have benefited from the R14 Million if it was used for funding?  And how much money is held back by NSFAS? So many questions, but for now let us turn to the legal side of the matter what does the law of the Republic say about such cases where by someone receives money mistakenly and deposited in their account? With NSFAS and the University launching investigations let’s hear what legal experts say.

‘’If a person receives money mistakenly transferred to their account and uses that money, knowing that that money was not due to that person, the receiver is guilty of theft,’’ Aslam Moosajee, lawyer for Norton Rose Fulbright. Was quoted from an article by Nkosinathi Shazi, (Huffington Post SA, 2017, 08, 30).

While other people labelled the student’s act of lavish spending sprees as unjust enrichment. This in terms of law occurs when a person is enriched at the expenses of others in circumstances that the law sees unjust. So here it is TMS peeps now the question is posed to you, and our hashtag is #spendorreturn the money? So we took the conversation to the students and got their views and this is what they said:

Lindokuhle Nhlumayo: The millionaire chick (hhayi) she spent too much money that it became public, if I was really pressed I’d have used that money but not in the way she did. If we could look at it, the money is used to help those who are academically capable of studying but financially challenged, when it comes to furthering studies. It would have stayed in my conscience.

Yolisa Maseti: I would have died of shock

Ayanda Masina: I would spend it, if you put money in my account what do you expect me to do? But I would only spend half of what that girl spent.

Let’s continue the conversation on our social media platforms.

20 things things parents should know about us