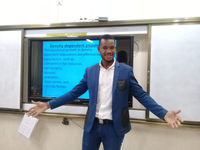 A village born 30 year old educator, Sibonelo Tshomela recently accepted an opportunity in teaching Science and Math teacher in China The young teacher describes his institution in China as a cognitively intriguing platform but challenging as he teaches exceptionally smart students who induce him into having content knowledge and pedagogical practices on his finger-tips.

Sibonelo teaches 10-12th graders Algebra, Calculus and Pre-calculus. His outstanding pedagogical content knowledge has eventually scored him a position as the Chairperson of Academic Committee. Sibonelo is willing to assist other young South African.

From a humble background

From poor rural area, KaMemeka where he had walked for approximately 10 Kilometers to reach school, Sibonelo never had it easy financially. He survived most of his primary school life with former principal’s learner reinforcement strategy through which he was consistently awarded R20 for his outstanding performance. This was the amount his unemployed mother utilized to buy him school uniform.

The visionary teacher completed his high school at Ibisi High School in 2009 with remarkable school record as an exceptional performer in Mathematics. He furthered his higher education studies with University of Johannesburg by enrolling in B.Ed program in 2011.

The bursary to the rescue

Faced with inevitable financial hardships, he had to pause studying in 2012 and continued after having awarded state bursary scheme for educators, Fundza Lushaka in 2013. His exceptional academic grades afforded him job opportunities at the university as a tutor and Chief of Residence Academic Adviser. Furthermore, he was afforded an opportunity to complete his teaching practicum at the United States of America as part of UJ’s Faculty of Education and Georgia.

Upon completion of his teaching degree in 2015, Sibonelo served as a high school teacher and mathematics tutor in some Soweto schools. Just as expressed by most exceptional young teachers in South Africa, the 30 year old could not withstand the emotionally and cognitively draining and entrapping school practices.

I remember early this year my learner obtained position 2 at the provincial Mathematics Olympiad. She selected someone else to attend the ceremony while I [was] the one mentoring the kid,” he expressed.
He further asserted that his class was purposefully filled with repeaters and would also be sent to attend every duty that demanded Mathematics teacher’s attention, with no transport and food support. At some point he had to utilize his personal finances to transport learners and offer meals during his enrichment classes. Due to all these experiences, he “saw a need to for [him] to find a school whereby [he] will be challenged academically and get more money to cater [his] needs and be able to support family.”

It was then that he decided to look for academically nurturing and supportive institutions. Recommended by a friend, Sibonelo connected with recruitment agency and left South Africa for China. He currently works in Kunshan, a small town in Suzhou district, where his efforts are greatly recognized and supported by for the betterment of quality education delivery.
Against all odds, personally and professionally, Mr Sibonelo Tshomela is an excelling agent of change.

When asked to comment with regard to scams connected to teacher recruitments in China, he recommended that teachers use urgencies they know and have been used by other people. He has also been requested by his bosses to assist in recruiting educators from South Africa.

A powerhouse in classroom and community.