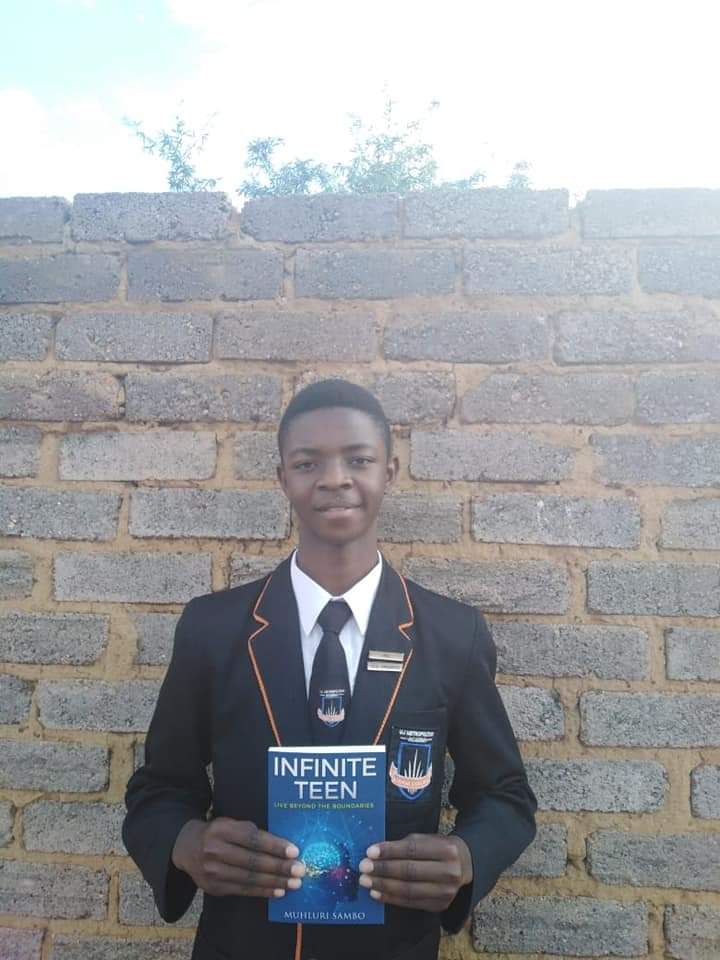 The 18 year old Muhluri Sambo talks about what motivated him to write this ground breaking Infinite Teen book.

Born in Malamulele in 2001 and I was raised in two villages by my grandparents Daniel and Selina Mabasa from Phugwani village.

I had a very humble upbringing—typical village lifestyle—one that featured closeness with my cousins since all of our parents were in the urban areas trying to survive while we remained back in the village.

Every morning we’d go to the farm and hang around the farmlands while ourgrandmother farmed. I was a very naughty and energetic child. I’m often told that I was rebellious. We spent most of our times outdoors, while playing all sorts of indigenous games.

In 2005 when I was 4 years old, I moved to Meadowlands, Soweto, for next phase of my life. I immediately began pre-school at Asha Pre-School in Dube. In 2007 we moved to Protea Glen. And in 2008 I began school at Discovery Primary School in Roodepoort.

As an advanced academic school, coping in my earlier years was a bit challenging because of the lack of effective use of the English language. To this day, my grade 3 teacher Mrs. Molele still jokes that one would never have thought that I had a future in Literature and Speaking, because I was one of the students who were struggling with English in grade 3.

Infinite Teen is a self-help book that empowers teenagers to live beyond the boundaries, by exploiting the infinite opportunities that life has in store for them. Teenage-hood is not just all about: rebellion, crime, substance abuse, teenage pregnancies or dropping out of school.

Teenage-hood is a stage in life of exploring and surpassing the boundaries, and with Infinite Teen, teenagers are guaranteed to achieve holistic health, morality, a desire to succeed and skills for personal independence that can help them achieve their dreams as teenagers or in their adult-life.

Infinite Teen is also a book that helps parents to form a relationship with their teenage children, by assisting them in becoming knowledgeable about the struggles of teens and the solutions they could use to guide them toward sliving an Infinite life.

See also  She is full of sauce, her culture her pride!!

The inspiration behind the book

My struggles and challenges were the main inspiration of the book. While going through these challenges, I often felt isolated because my parents and I didn’t have a close intimate relationship.

I began searching for the solutions alone and also wrote them down. Later on I decided to use those solutions, to write a self-help book that would help teenagers who were going through the same path to not feel alone and isolated.

I’ve always wanted to also let my fellow teen brothers and sisters know that substance abuse is not the way to deal with situations.

The publication of the book

I approached Vukulu Sizwe Maphindani the owner of Classic Age Publishing and presented my manuscript to him. We had a meeting and he loved the idea and vision of Infinite Teen and the publishing process of the book began. All I gave them was a title and a manuscript and they edited and also designed my cover.

The future of the book

I see the book as an international best-seller that will change the lives’ of many teenagers and parents in the world. I see it as a problem-solver for many teenage related problems. It has currently sold over 500 copies, with 5 copies being sold internationally. 1 in Netherlands, 1 in Lesotho and 3 in The Arab Emirates.

I encountered many: from not having the skill to write, adequate vocabulary, lack of parental support and the fear of breaking my boundaries.

I definitely can’t say I didn’t have resources, everything is a resource especially a phone. I solved my challenge of the skill through constant practice, reading—extensive learning—and engaging in social programs to expand my view and understanding of the world.

For my vocabulary, studying the dictionary did the job. Every word I came across everywhere I’d note down and at times I’d even look through the dictionary for any interesting words to learn. My parents, just like any other parents in the world, feared the worst for my future.

They were concerned about job security, and in this day and age, such concerns are typical since Artists are failing to make ends meet. Late last year when they caught a glimpse of the level of my work; they were assured that I’d make it, and today they’re my number 1 supporters. In terms of my fear, I had to learn to accept the truth that I was formed by God and I had a purpose to fulfil.

Both parents and teenagers are loving the book, some are already even encouraging me to write another book. From the words of a customer, “It’s a book that the world needs, because not only did you use philosophical works as a guide; you also used the Bible as a foundation of the topics.” Teachers are also recommending the book to their learners, and one teacher also advised me to approach and request the Department of Education to include the book in the schools’ curriculum.

Places I’ve been invited to