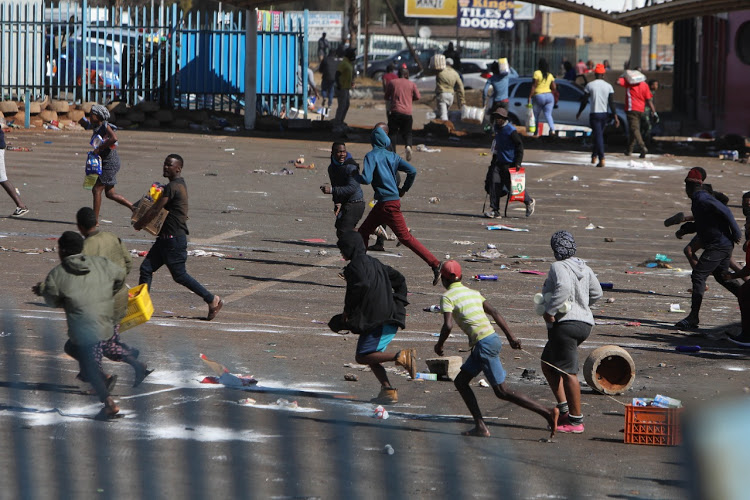 While South Africa is under siege from the great scale looting happening in Durban and Johannesburg. Residents in Townships have mobilized themselves to protect local clinics and some shopping malls which have survived the carnage.

In Durban and the Pietermaritzburg area, white communities have decided to block entries into their residential areas and allowing white residents to pass through while black residents have to be searched, produce proof of residence and if they have items in their cars then they are required to produce receipts for those items.

Indian communities have decided to attack and kill innocent black people, accusing them of looting. This has sparked serious race tensions in Durban.

The horrible events happening in South Africa has 4 sides:

The South African poverty and hunger rate has increased tremendously in the past 15 years. Majority of people entrusted the ruling party the ANC to deliver the “Better Life for All” which they have been promised.

The ruling party inherited a captured government and monopolised economy from the apartheid regime. With many people calling for the unveiling of the CODESA negotiation agreements, it is safe to say black people feel that they were betrayed by their leaders present at those negotiations. That notion has lasted up to this boiling point, with black people feeling betrayed by the leaders today, coincidentally some of the current leaders were at the CODESA negotiations including the current President.

This is why the people of the land lived in poverty even after achieving freedom. While the Democratic Government delivered in some of their promises, they could not maintain the pace in keeping up with the fast changing world, the fast changing society and the Monopolized Economy which remains exclusively in the hands of the few.

This means that while they delivered better life to 10 people, 30 new people are born, adding to the number of 100 people that are waiting in line to be handed that better life. An entire generation is born in poverty with no hope to come out of it, given the exclusive economy which cannot accommodate majority of people in Townships and Rural Areas.

See also  The country is going to have elections in 2019.

The solution to this would be to break-down the economy into segments. There is already something called “Township Economy”. This economy needs to be facilitated in a way that it serves the people of the Townships. It has to be protected. Then Rural Economy needs to be a thing as well, similar to the Township Economy. Create an environment that will allow people to build their own economy independent of government.

Townships and Rural Areas have the consumer power, they just need leadership that facilitate and mobilize resources to grow this economy.

South Africa has not taken education as serious as it should. You just have to look at the political heads of education, their failure to ensure quality education has not been highlighted enough, therefore cannot be challenged nor can it be attended to by the poweres that be. But that is not the focus of this opinion piece.

The school dropout rate is at 40% and that number may have increased since the pandemic begun. School dropout means you are leaving the schooling system without the Matric Certificate, or any certificate for that matter, which may assist you in studying further or getting employment.

The learners who drop out will have to be absorbed by this struggling economy. If a University graduate cannot get a job, what happens to the school dropout?

The few looters we have spoken to have been driven by poverty and hunger, but when you ask them what will happen when the food finishes, it is as if there is a wake up shock, because they have not thought this thing through. The lack of education drives people into survival mode, where they do not calculate their actions. They live for the here and now, no consideration of the tomorrow.

Schools are looted and vandalized almost daily in South Africa, with very little action taken to stop it. In most cases it is learners who have dropped out of the same schools that come back to loot and destroy the school while trying to make a living.

Therefore what the world sees today across South Africa is an everyday occurrence in most black communities. Sport facilities, schools looted, vandalized and skinned down to nothing.

This is the criminality that people in the Townships and Rural Areas have been subjected to. The increased numbers of young people on drugs have been a pandemic in the making. They are called Amaphara or Nyaopes, these young men loot their homes, and become menace to society just to fix their addictions. Their number keeps increasing.

The solution in ensuring that education makes a difference, government and other stakeholders must invest on independent Tutoring entities such as WTS MATHS AND SCIENCE and X-Matics and many other similar entities. These independent tutors are able to accommodate learners who may struggle with the overall schooling system.

Communities complain about Police failing to combat crime in Townships. And therefore the criminal element in these unrest is high; there are cash-intransit criminals out there, gangs, and drug dealers, looting alongside a granny that is just there to get food for her grandkids.

There’s also an alleged political element which inspired this great scale looting. The strategic destruction of economical points such as Durban harbour, burning of factories and so on, shows a well planned attack on economy. While the ANC officials came out and said to people that they are being used by these masterminds who are taking advantage of the people’s poverty and lack of education; well look who’s talking?

The very same politicians who have used the poor conditions of people to stay in power.

See also  Teacher shortage may be self inflicted

Speaking to a community member in Tembisa, I asked why did he not participate in looting as well? He said “My brother I’m also poor and unemployed, but I cannot commit crime, at the same time I do not judge the people who are honestly desperate for food. A hungry person does not reason. Nna, I live in hope, even though I have nothing, but I hustle and I have hope that something will come up, most people do not have that hope and therefore see no shame in looting” concluded the resident of Tembisa.

I also spoke to another looter in KZN who said “I didn’t have food before this, I am a domestic worker, because of the lockdown my bosses do not have work for me, I’m now relying on the child support grant which is not enough. So I saw people going to the shops coming back with things, I also went. I couldn’t stay in the house with nothing while people even those who are well-off going there to take things for free. So I took a few things as well.” concluded the Marianhill resident.

Take strength ma Africa, let us rebuild, but let us not leave the root of the problem unattended, this is the opportunity to come together and clean up! Clean up and heal the wounds of poverty, poor education and economy that marginalizes millions of people.

There’s no political solution to the problem. People young and old, black and white have to take the lead together in unity. Soweto has a leader in Nhlanhla Lux, politicians are not on the ground for you, they are on the ground for themselves. To exploit your vulnerability for their political gains. Do not allow that to happen!

I have written a book that I believe is the much needed solution in the country right now, it is available on the amazon: