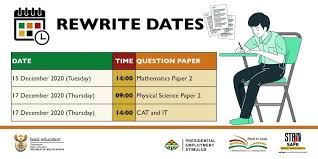 Following the leaked Maths and Science exam papers last week, the Department has ordered there must be a rewriting of these exams again. This comes after Umalusi (Exams Accreditation body) told the Department of Basic Education that they will not recognize the leaked exams.

Teachers Union SADTU and Learners movement COSAS are taking the Department of Basic Education to court in order to try and stop the rewriting of the exams.

The Department of Basic Education said there is no other way around this issue except rewriting the exams; however both SADTU and COSAS argue that the number of learners who have been exposed to the exam papers are less than 200 out of 390,000 learners who wrote the exam; “why punish everyone”. Another argument is that this is not the first time that the exams are leaked; previously learners who have cheated the exams using the leaked papers were found through the marking process.

The Union is pleading with the Department of Basic Education to do the same with this leak.

Zoning in on the impact of this decision to rewrite exams, Tag My School Magazine has interacted with Grade 12 learners who expressed their feeling on the matter.

Speaking as anonymous this is what they said:

Imagine going through the same stress twice, I can’t deal, this is too much.

We had to push hard to complete school calendar year, Covid 19 was stressful, being at school affected us mentally, now this!

What about those of us who did not cheat? is this fair on us? why can’t the Department punish those who cheated, now we are carrying other people’s sins.

You know how hard Maths and Science especially paper two, yho! now we have to write it again? They must make those who cheated to write the exams not us

The psychological effects of rewriting the exams is extreme to some learners; other learners have threatened suicide.

While the Department of Basic Education is put in a compromised position, sadly their lack of consultation with the relevant stakeholders when making decisions earns them no empathy.

The impact of their decision may have been less than what it is now on both learners and parents have they looked at all angles of their decision, consulted all stakeholders such as children psychologists.

It is also concerning that the Department of Basic Education does not have contingency plan on such matters. The Department’s spoke person Mr. Elijah Mhlanga said that they “always strengthen the security” around the exam papers, “but if people plan to leak exams and they find a gap, they will; this is why we are not sharing our current security details put in place for the papers that will be rewritten” concluded Mr. Mhlanga in an interview on SAFM Radio this morning.

Leaked and rewriting exams remains another stain on this ministry. It is a direct result of the stubbornness by the Minister of Basic Education and her team to complete the school calendar year under Covid 19 complicated and abnormal year.

This is Angie Motshekga’s legacy, and this is the 2020 Calendar Year crash landing we spoke about earlier. Many teachers lost their lives due to Covid 19, now learners are becoming casualties of the decision to reopen schools.