The looters are not the problem, look closely…. 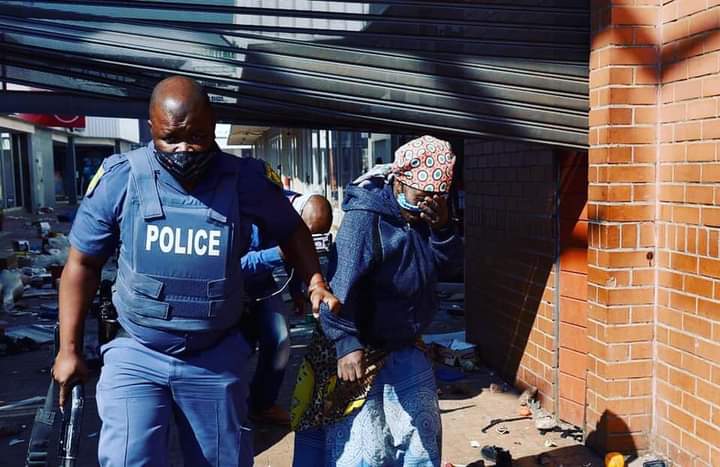 The South African situation is the time bomb of unemployment and hunger that was ticking since, 94 and currently exploding as looters are running riots in the country. The government, the media and the privileged are at the center of this problem.

The current President has not been held accountable for his failures, this government is not accounting to no one. The South African Media has completely decided to align themselves with a particular narrative which does not enforce government to account.

In fact the media has played along to what this current administration is doing without questioning anything.

When the protests began, it was about the members of society who felt that the former President was unjustly incarcerated. This was just a small matter, the situation was already on the knife edge leading up to the protests. There were two protests before then, one protest was organized by the opposition party the EFF demanding Sahpra to speed up the approval of Russia’s Sputnik V vaccine and the Chinese Sinovac manufactured Coronavac vaccine. The second march called the anti lockdown, but this march unfortunately failed, however people were already on the verge of revolt against the endless string of lockdowns with very little solution in sight.

This time bomb has been ticking since the ANC government took over from the evil Apartheid regime. Every single Administration then, has been putting a blanket over a severely wounded society. Politicians and their families, friends and those brave enough to be corrupt, colluded in looting the people of South Africa. Those who are fortunate enough to progress without corruption are very few. Therefore the biggest looters have been the government.

See also  Exams Panic, how to handle the pressure?

Since 2007 the governing party has been prioritizing itself over South Africans, misused their power by monopolizing the service delivery and the economy to keep themselves in power and enriching themselves. The looting and lawlessness currently happening on the ground is the direct reflection of the leadership that has been governing the people since 1994.

And so the next time you have the government officials talking bout the “looters and criminals” remember that you will be hearing from the masters of looting and criminality themselves!

While the middle class is sitting comfortably in their priveleges calling these people “looters and criminals” remember that you have inspired it when you decided not to help build this society, instead you have accumulated all the wealth, and took to the social media to rub it on people’s faces.

People always compare the former President Zuma’s house e Nkandla with the neighbouring mud houses, but the very same people live in Sandton and Surrounding areas and just across the road it’s their neighbors, the Alexandra Township. Everyone one of us have created the current situation in one way or the other.

If a person is drowning they will grab onto whatever it is they can and they will drown with it if that thing does not offer any help. Almost half of the population is unemployed and are drowning in poverty. And the situation right now is them grabbing on to anything they can and drowning with it, do we drown along or do we help?

See also  Dear girls, you are on your own!

As a privileged person who may have been blinded by your privilege to the realities of other people called “looters” today, you get to see the extent of how damaged and hurting your neighbors are. Maybe before you try to look cute by your “these looters”, learn, take this in and reflect on your contribution to this!

People complain about the damage to infrastructure, these people on the streets today have no infrastructure they have no Economy, that language is for the middle-class, business and government. This is what happens when you run an exclusive economy, these people have been marginalized, locked down with no-one addressing their livelihoods.

The Presidential address on Sunday was one of the lowest and most embarrassing moments of this administration. It was sowing division, tribalism and intimidation. The President actually lied during this address, calling videos of the damaged infrastructure fake News and old videos. He also lied about these protests being of ethnicity origins. The next day he had an opportunity to correct his unfortunate remarks, but the man completely missed the point, instead he carried on with intimidation and his inability to lead and inspire the nation. Yet the SA Media has not scrutinized or demanded him to account. They have just played along to the lies and deceptions by the government.

See also  Actually children are at risk from Covid 19!

When the Free Zuma protests were organized and massive mobilization was happening, the SA Media completely turned a blind eye to the ticking time bomb that was about to explode. It was as if they were on a victory lap of some sort. When the vandalizing started the SA Media never covered a single incident at least for two days of these protests.

People took to social media to show the world of what was happening, as these reports by the public increased on social media, only then did the South African Media felt pressured to give coverage of these protests. In avoiding Fake News we may run into the danger of the orchestrated misinformation by the Mainstream Media. The monopolisation of information is as bad as the dreaded Fake News.

One wonders if the censorship was deliberate? And how much of this ignorance by the SA Media has added to the disruption. If the reporting of these protests happened earlier how many businesses would have been informed and hopefully saved the infrastructure damages. But like the current government, the SA Media is disconnected to reality on the ground, biase and cannot be held accountable!

We have to be better than that. These are not looters because when VBS, Steinhoff happened, your Pastor chowing the money, you stealing from the company, that was called something else, not looting.

I have written a book called “Chronicles of the Unemployment” This book is extremely relevant to the current situation. I highly recommend it, you can find it below: